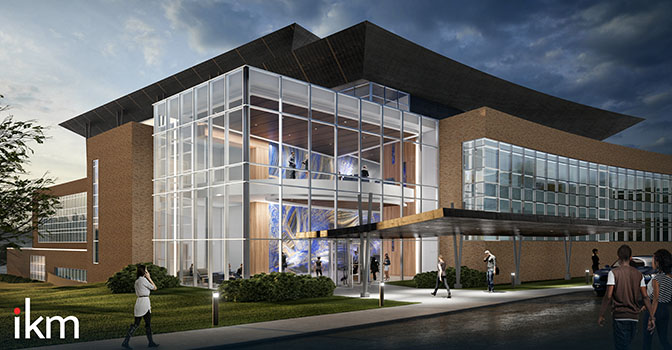 Landau Building Company’s team completed an addition to the atrium of the RNI Center for Innovation and other interior renovations, working hard to meet the dedication ceremony deadline.  It took a heroic effort from all involved to make this happen, eliminating five weeks from the construction schedule to be ready for this event.

The renovations, which prepared for the arrival of Dr. Ali Rezai, a world-renowned neuroscientist and neurosurgeon, included 1,448 SF on the first floor, 2,331 SF on the second floor, and 3,527 SF on the third floor. The scope of work included the Human Performance Research Center, including a state-of-the-art fitness center, floatation recovery rooms, cryostimulation therapy room, light therapy rooms, a mind gym that uses Virtual Reality for research, and sleep pods to study Circadiam rhythm and sleep.  The LIFU MRI suite allows transcranial magnetic stimulation that is being used to treat disorders ranging from Opioid addiction to fighting Alzheimer’s disease.  The building addition houses a grand entrance with a 30’ mural entitled “The Boundless Brain” created by Dr. Greg Dunn and Dr. Brian Edwards, which is a hyperdetailed representation of a quarter million neurons of a sagittal slice of the human brain.

WVU Medicine created a great video highlighting the institute’s story, which you can watch here.

This article was posted in Landau News and tagged Landau Building Company, West Virginia University Medicine, WVU Rockefeller Neuroscience Institute. Bookmark the permalink. Follow comments with the RSS feed for this post. Both comments and trackbacks are closed.